APB PRESS RELEASE 6/21/2017
by MikeJones AKA Popek
Once upon a time there was a shitty Free2Play game that went by the name of All Points Bulletin (APB).
All was quiet on the APB front until a man known as MrEpicGoat decided to grief in the game and was met with the utmost resistance by one Diane 'Tiggs' Migliaccio. What followed was the most hilarious battle around including one beefy man fighting another beefy man (Read Tiggs) which resulted in majority of the community receiving wrongful bans from the game in APB's attempt to detect MrEpicGoat's .exe which assisted blind children with aim assistance in the game.

Sit down and enjoy the great screenshots and reactions that followed from the community as well as some more information regarding the evil Community Manager Diane Migliaccio. (We do not mention her daughter Cassandra Migliacco here nor her 2015 Chevrolet Silverado VIN 3GCUKSEC7FG122126 ($66,017.97) as that would be in bad taste.)
Ms. Migliaccio values her time to around $25/hour as that is what she charges APB for her community work.
APB Regoated - UnknownCheats the cheat can be downloaded there.
An anonymous source provided us with information that "Diane Migliaccio has a habit of deposting her paycheck from APB into her daughter Cassandra's account in order to avoid any sort of levy or bank freezes on her account and avoiding taxes.
Reviews regarding this page:
"Music is cool, 10/10 would click the link again" - Elowen
"You really wanna get banned from Forums do you?" - Snake Eyes
"nice" - Arrowtotheknee

First you have to find out who I actually am, as I am not MrEpicGoat. Speaking of prosecution, should anyone get arrested there are plenty of things that can be sent to the appropriate authorities regarding Diane's illegal activities.

Look at Diane getting all worked up over a video game. Tough life. Went from abusing horses [1][2] to abusing people trying to help out blind and deaf children play All Points Bulletin.

To be honest, Diane should focus less on charging $25 an hour for eating McDonald's burgers mixed with blood thinner medication at her computer in her comfy special up-to-200-pounds lounge chair and focus more on working out and trying to get her body back in to shape to prevent future strokes :)

The song can be found here

A user harassing MrEpicGoat for his developmental efforts to make this game blind-friendly.

As you can see here, Mr. Jericho banned MrEpicGoat for life and resolved the issue. Some may say that he only made things worse for himself and the community he is no longer apart of. The actions of Jericho led MrEpicGoat to further develop and test his aim assistance package for the blind children in Africa which he then proceeded to release on UnknownCheats.me It's also worth noting that the bans were never permanent and were evaded with the simplest maneuvers.

Here we can see some not-so-happy professional e-sport atheletes issuing complaints regarding MrEpicGoat for his community work in APB. 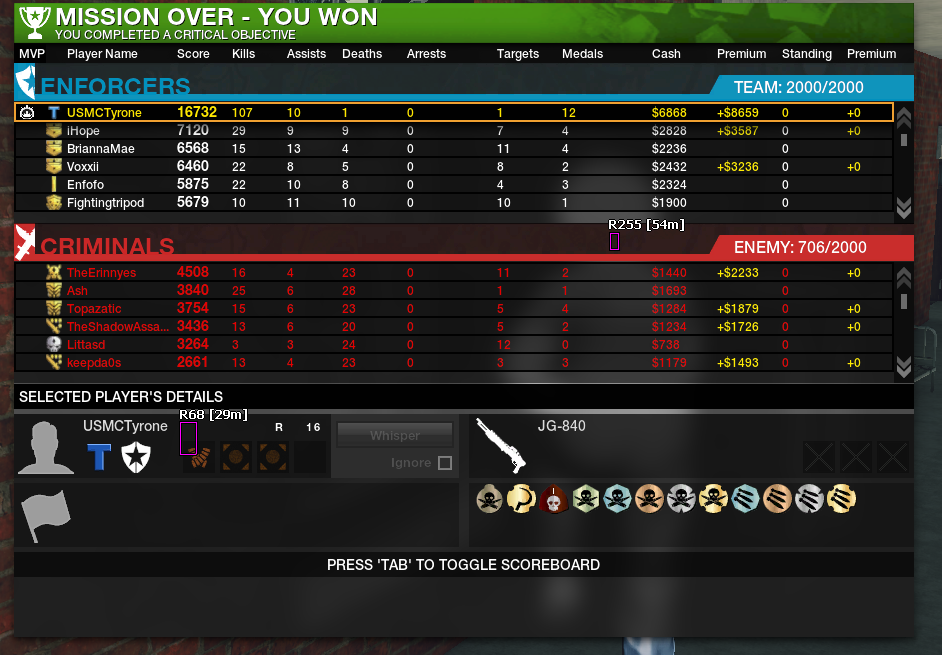 MrEpicGoat A/K/A USMCTyrone was not in fact cheating in this mission but had simply played so much APB that he had become one with it.

Developers mad that they have to work during one of their breaks on the 'developer calendar year' (made up mumbo-jumbo).

A man who's seen it all opinion on the current state of the game and the many threads/posts created regardind the cheating epidemic caused by Mr. Epic Goat.

An intelligent man showing that APB is, in fact, pay to play. 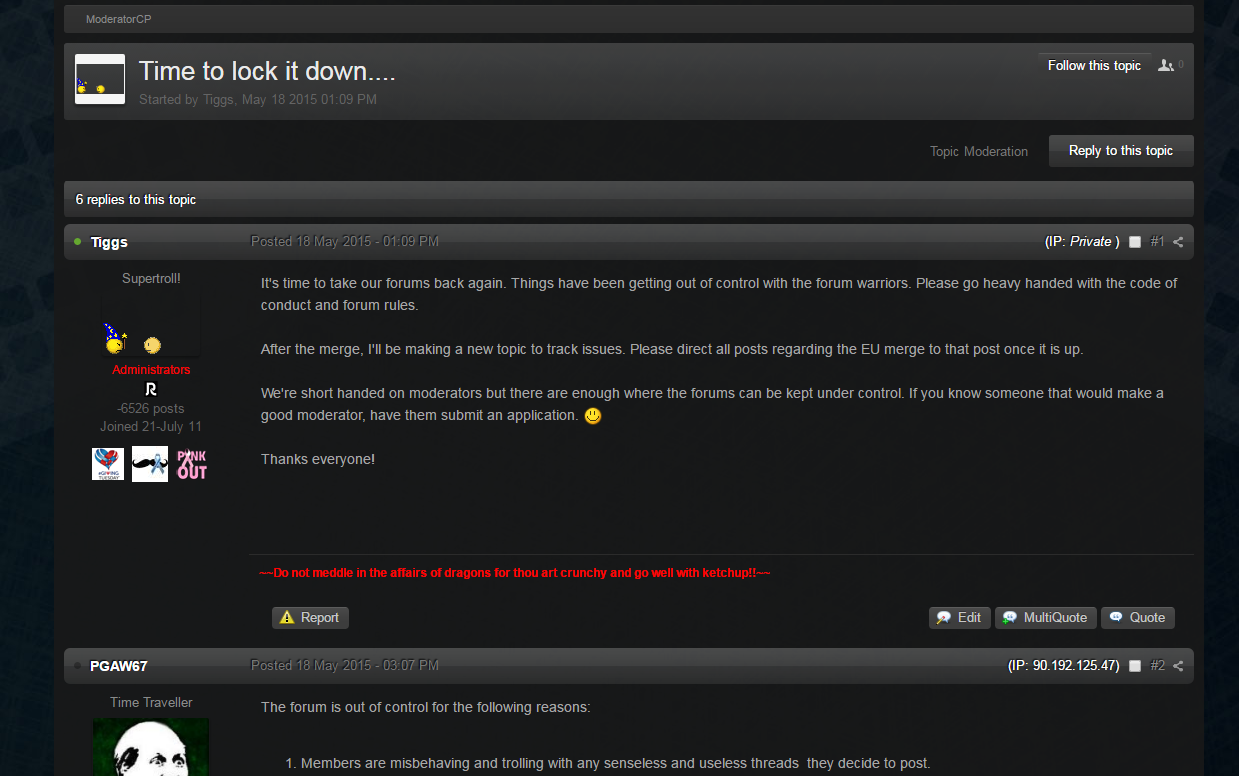 You go GIRL!!, show these basement dwellers what a real MIWF (Mother I wouldn't FUCK) would do in this situation. 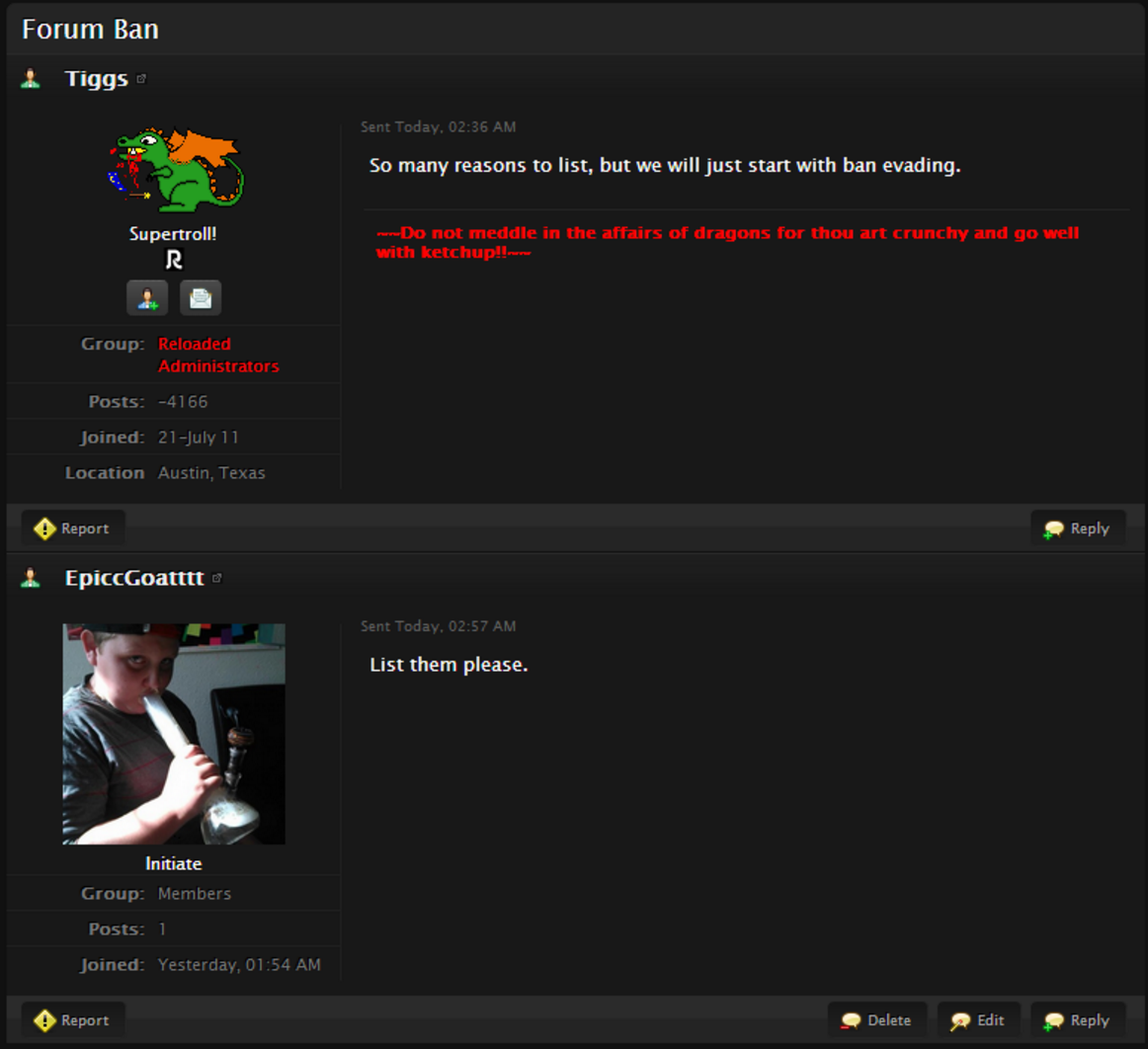 Tiggs communicating with MrEpicGoat regarding his recent ban from the game and MrEpicGoat requesting the list of charges against him.

Yet another complainer with nothing intelligent to say. You are now a victim for reading his forum post.

MrEpicGoat provided himself with almost-administrative powers in order to cut down on the amount of abuse and harassment he was receiving in-game for testing his aim assistance program.

Even one of the shitty developers didn't have kick powers rifk

It's a sad world when people in developer positions do not know how to create a cheat-free game or prevent the very same cheats from working properly. Nor do they know how to properly implement a ban system that can't be evaded with a simple folder and text file describing a different hardware ID.

Those are fighting words.

Truer words have not been spoken on the forum since that day.

Jericho, A/K/A the coolest man alive showing that it's best to ignore the complaints rather than actually do something about them. 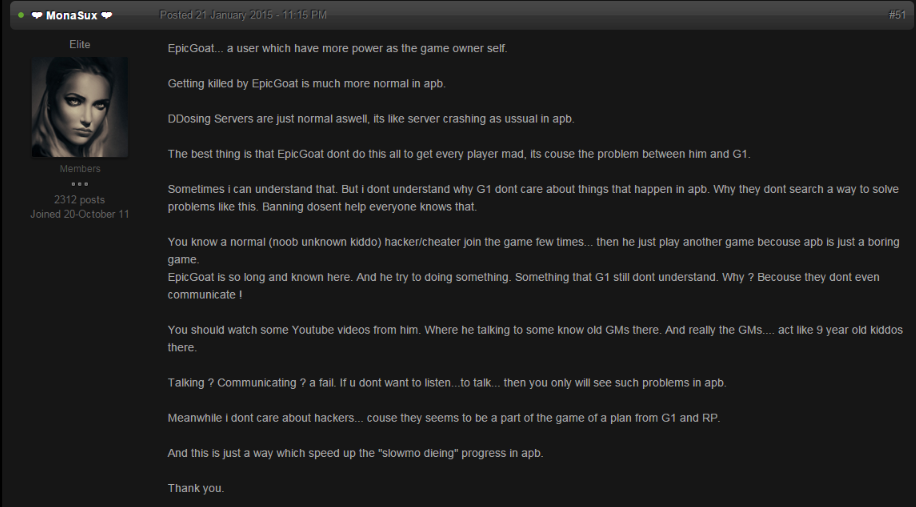 The English language of this user is on par with the community work and game development done by the APB team and Reloaded Games, LLC. 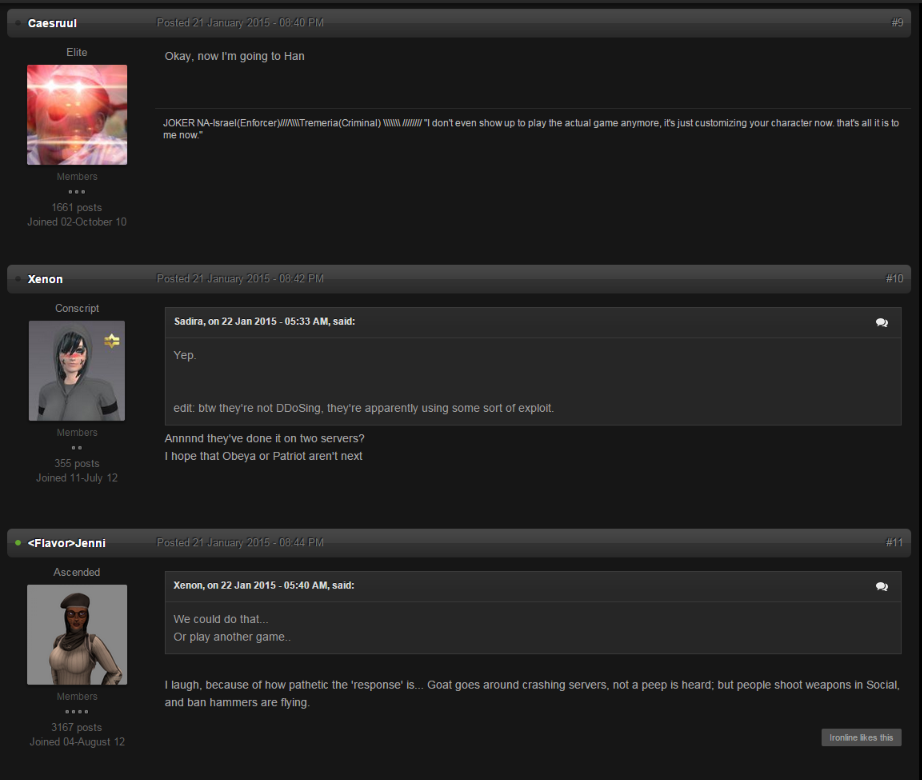 Focus on the last post out of the three above, the employees of APB spent more time in Social listening to 14 year olds pretending to be girls than they actually did performing their APB-given duties. 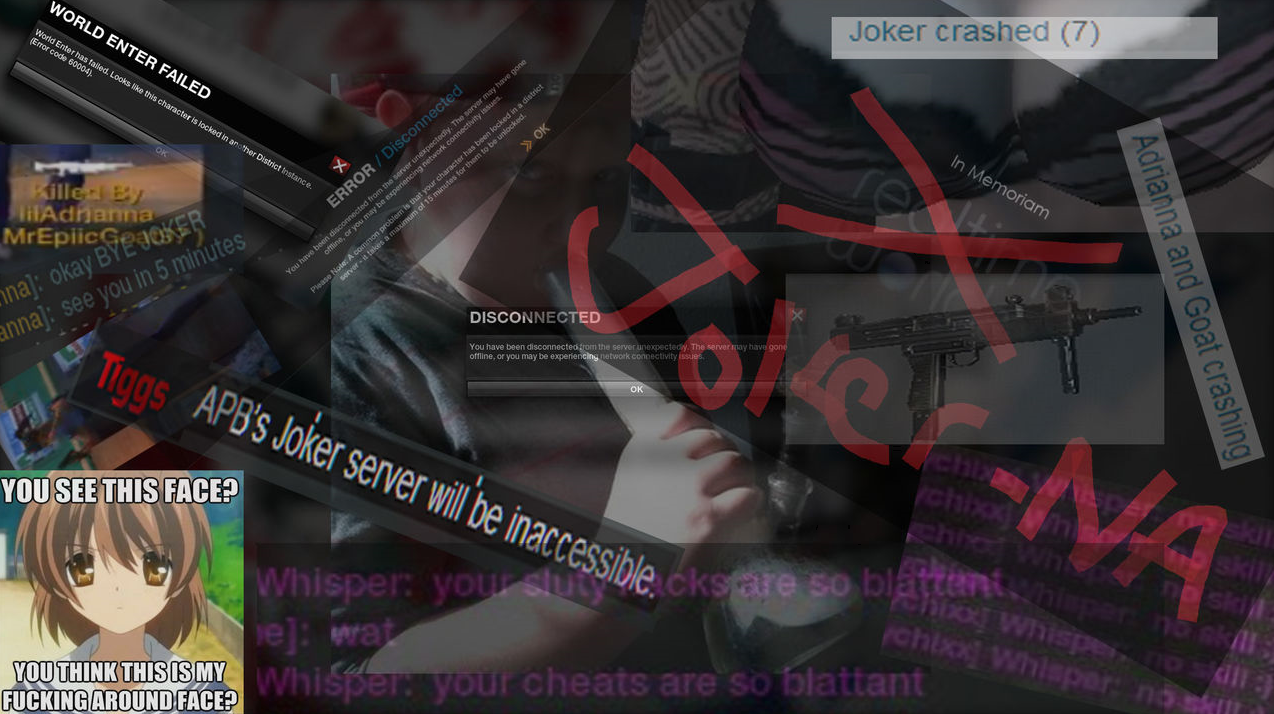 Some great art to demonstrate the fuckery that took place within this community.

MrEpicGoat released an APB Cheat for blind-children to be able to play on UnknownCheats.me which caused a domino effect of players downloading cheats just in order to be able to stay alive for longer than 30 seconds which in turn only caused more players to download the very same cheat in order to play the game they so loved and couldn't live without. APB developers decided to implement a detection system for the cheat in order to ban the influx of cheaters, old and new, however they failed miserably as it resulted in innocent people that weren't even cheating in receiving bans from the game, some of those losers actually spent money on the game only to be banned from it later for no reason LOL. 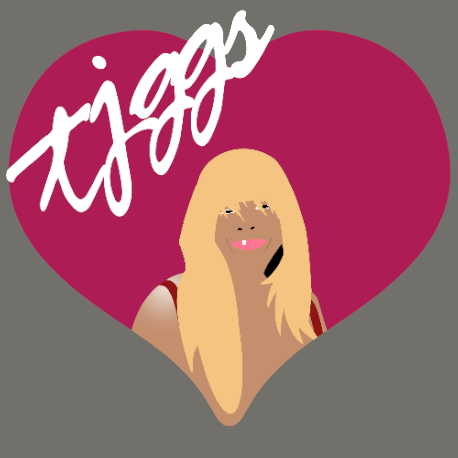 Tiggs failing the community once again :( At least she will be able to bill for more consulting hours now dealing with the fall out of the cheat being released. Everybody wins.

Her mom looks really proud of her

Get the best hack from MrEpicGoat and win all your games.

Another fucking cheater caught, 453.8 hours of solid cheating in a shitty game.

Me, as a professional player of multiple game-genres, can testify and confirm that having a decent amount of skill has resulted in a ban numerous times to numerous people.

Can't argue with this review, Diane Migliaccio is, in fact, a cunt. 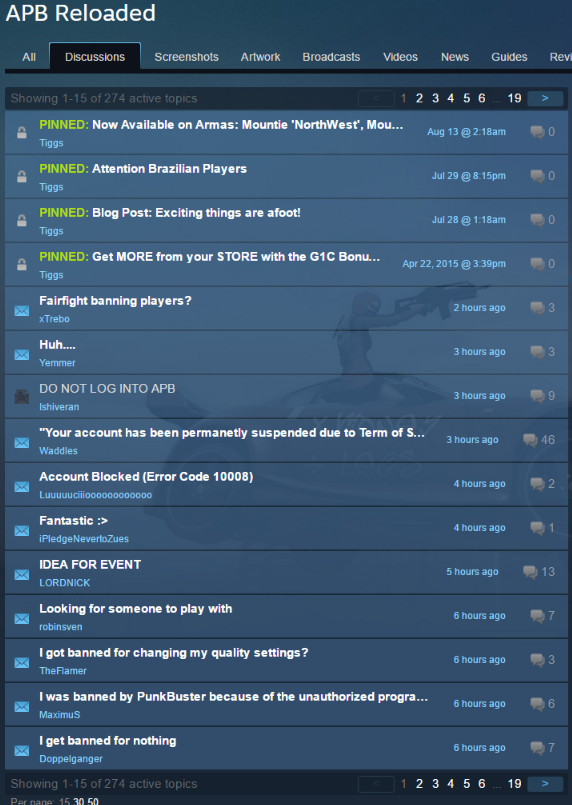 APB Players warning others to not log in to APB as everyone attempting to play is receiving permanent bans from the game.

Shittiest developer team around finally fixes retarded issue they caused themselves. Stop paying a 50 year old woman for reading forums with her reading glasses and dictating her replies with a microphone as she is unable to type the $7,000 monthly and invest in an actual development team.

One page of one of the many threads created due to wrongful PB bans.